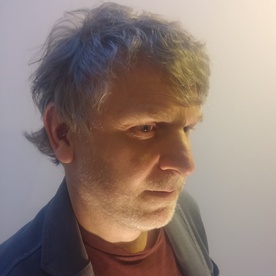 Robert Černelč (1970) graduated in painting from the ALUO and in film direction from the AGRFT. Since 2013, he has lectured at both of these Academies. He has been a Slovenian filmmaker since 1999 (a screenwriter, editor, production designer, and director of fiction short films, including Abaddon, 1999; Worms, 2004; The Bottom, 2014). The Birdbreeder is his first feature.