A miners’ wind orchestra from Slovenia goes on tour to a small Austrian town to perform at the Wind Orchestra Festival in the parade section.

We follow five different stories that take place during the wind orchestra tour: the story of the bus driver who is afraid to lose his job to a younger colleague; a conductor’s teenage daughter and son experience independence and make the conductor look bad in the eyes of the Austrian hosts; the band members’ wives back home once again feel how to be women rather than just wives and mothers; and an Austrian couple hosts the band’s “party animals”, wondering whether to trust the guests. The final challenge takes place during the band’s ride back home, as one member thinks that the bus has hit something. Has it? A black humour drama with an international cast in the Slovenian and Austrian spoken language. 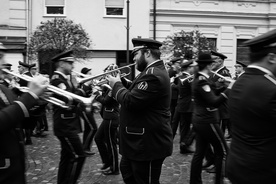