The film tells the melodramatic story of Lucija, who works as a servant on the farm of the wealthy Podlogar family. Her presence brings strife into the family, as she falls pregnant with one of the master's sons. The problem of whether the pregnant serving girl is to be "forced" to marry the future father of her child culminates in a tragic resolution. One even more tragic than it would seem at first sight. Can Lucija withstand the psychological pressure, contempt and pity she is subjected to by the Podlogar brothers? 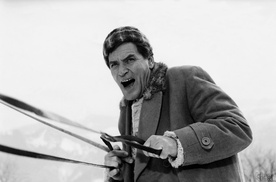