Mario is a man who knows everybody, and everybody knows him. He knows all about what is going on in his city of Maribor. But above all, he is a first-class percussionist. He has appeared on stage with some of the greatest Slovenian and international musicians, playing rock, world music, and jazz. At the pinnacle of creativity, Mario learns he has terminal cancer. His prognosis is very poor. The deadline too tight to accept. The desire and will to live too strong to give up. Mario agrees to everything including the most invasive forms of treatment. Time is mercilessly running out. 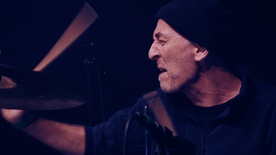