A mysterious window invitingly calls a young man, who is in mental distress. We alternately follow his actions through the real and mental worlds. How will he decide? The film tells the story of the main character Sebastian, who is contemplating suicide. His fate is finally announced and sealed by the budding artist Maria, who appears in the story as a metaphor for the unconvincing. Throughout the film, Jolanda, wrapped in white, is also shown as a foreboding of the future, which is only the fruit of the protagonist's imagination. 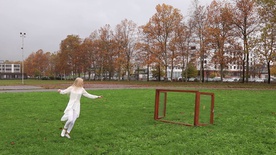